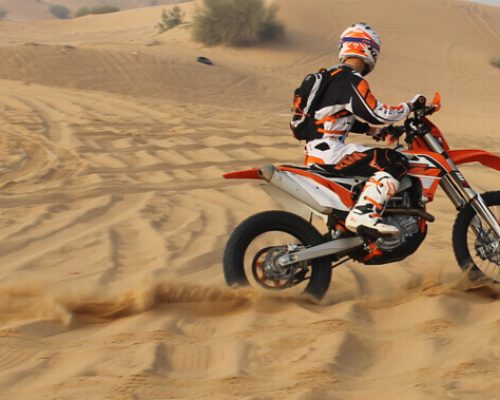 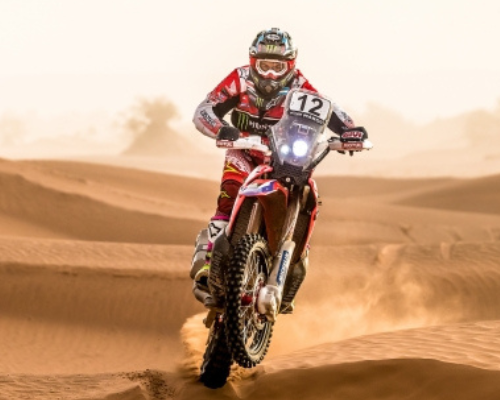 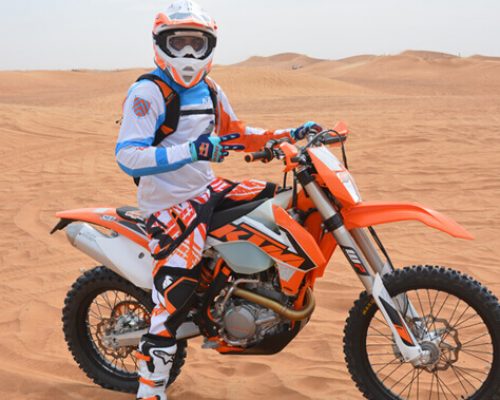 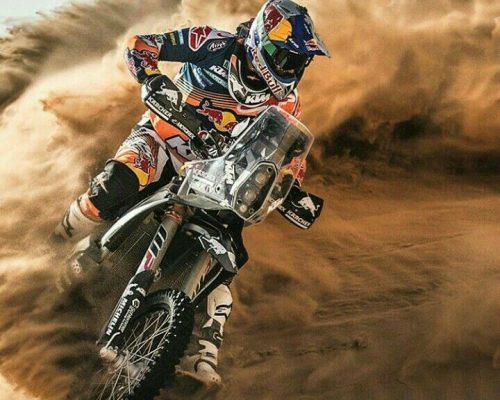 Riding a bike is about so much more than just getting from A to B. It’s about feeling the wind in your hair, the sun on your face, and the sense of freedom that comes with being on two wheels. If you’re looking for an active vacation that will leave you with some incredible memories, then our Dirt bike rental Dubai tours are perfect for you. We’ll provide you with everything you need to make the most of your time in the desert, including a top-of-the-line dirt bike to take on the terrain. So come and join BuggyRents for an unforgettable experience.

Riding a dirt bike in Dubai is a great way to spend your vacation. It is not only a great way to see the sights of Dubai, but you can also meet other people who share your passion for the adventure. A dirt bike is designed for off-road riding on dirt or gravel roads. Our business of dirt bike riding in Dubai is your go-to spot for guided tours on brand-new KTM 450 Enduro bikes for 2021. We know these bikes inside and out, and we can attest to their quality – they’re always flawlessly maintained and in excellent condition. Plus, we’re proud to offer rental Dubai bike tours at an affordable price.

The bike stands for liberty, self-reliance, and freedom. More than any other mode of transportation, bikes are linked to exploration and the open road. Our firm cordially invites you to take part in a Desert Motocross event in Dubai and experience the amazing feelings of riding the dirt bike of your dreams. Our firm can provide you with outstanding moterbikes Tours in Dubai services, and you can be sure that riding a “iron horse” will be an amazing experience if you want to spend your vacation being active and outside and experiencing a lot of crazy feelings.

Our business in Dubai specialises in guided tours on brand-new KTM 450 Enduro bikes for 2021, and we are knowledgeable about them inside and out. We can affirm that our bikes are flawlessly maintained and in excellent condition.  We also offering buggy rental dubai tours in affordable price.

Since you will be given specialised, cutting-edge equipment that will safeguard you in the event of an accident, you can feel comfortable and secure when working with Buggy Rental dubai. The entire body, from head to toe, will be shielded:

The helmet is composed of unbreakable plastic and does not contain any glass because if it did, it would shatter in a car accident and would not be able to shield the biker’s head.

When riding a quad bike in Dubai and falling face first to the ground, the rider’s jaw is also protected by the helmet, therefore there will be no injuries.

The collarbones, which are delicate areas after an accident, are protected by a hard shell as part of body protection. Knee guards made of strong plastic are used to protect the legs.

How to Reduce the Risks of Accidents & Injuries?

We provide you with all the safety equipment you need (free of charge) to remain safe while driving. Always keep your helmet, gloves, and protective clothing on at all times when in the buggy. This equipment protects you from small stones, pebbles, and debris that may pass by at high speed. In addition, your helmet and clothing protects you in case you fall off the buggy.

Due to the random nature of desert driving, always keep a safe distance from other buggies in front or beside you. You should always be aware of any vehicles that may be in your line of driving, because buggies may quickly appear within your danger zone.

Over speeding is a leading cause of dune buggy accidents. Make sure you’re always driving at a speed where you can control the buggy at a moment’s notice. Always follow your guide’s instructions and avoid taking sharp turns or drifting.

Always keep your headlights on so you can maintain maximum visibility at all times. In the desert, what appears as a slight bump may actually be a hill or a hole that can make you roll over. Your headlights will help you spot dangerous terrain early so you can adjust accordingly.

Our tour guides have taken the time to map out safe routes that you can use during your buggy adventure. Make sure you stay within these routes while exploring the desert. You should also exercise extra caution when driving over dunes. Don’t accelerate rapidly up and down dunes because you may end up jumping off the edge and possibly crashing.

Some more tips while riding Dirt Bike in Dubai

How much is Dirt biking in desert in Dubai?

The pricing listed is for a single-seat Professional Tour Guide AED 750 per tour and duration is 2 hours.

Do you need a license to drive a motorbike in the desert?

The dirt bike license is not required for off-road adventure in the desert but your passport must be required for riding.

The KTM 450 xc-w is one of the best desert bikes for riding. The bike used the latest 4-stroke technology.

Are Dirt bike is good in desert?

Of course, Dirt bikes are a good adventurous activity in the desert because you can easily handle the bike on soft and hard sand.

What do you wear to ride a dirt bike?

Assuming you‘re going on a guided tour: – Long pants – Long sleeved shirt – Sturdy shoes – Helmets and goggles If you have your own bike: – All of the above – Plus, a motocross bike – And, protective gear for your bike

How do you ride dirt bikes in sand?

How do you jump a dirt bike in sand?

To jump a dirt bike in sand, you will need to approach the jump at a high speed and then pull up on the handlebars just before you reach the jump. This will cause the front wheel to come off the ground and the bike to become airborne. As you are in the air, you will need to keep the bike level so that it doesn‘t nose dive into the sand when you land.

What is a desert bike called?

There are multiple names for the desert bike such as KTM Bike, Dirt Bike, Motocross Bike or Motorbike etc.

Is it easy to jump a dirt bike?

A dirt bike ride can be thrilling and challenging at the same time when you jump. The right equipment, posture, and patience will help you learn how to jump on a dirt bike with practice and perseverance.

How much is a dirt bike rent cost?

The dirt bike minimum price 750 and maximum price 3950 available . As many hours a heart is taken and available for there days to rent .

Can I rent a motorbike in Dubai?

Yes, you can rent a motorbike in Dubai with cheap and affordable price.

What should you not do while riding a dirt bike?

There are many things you should not do while riding a dirt bike, but some of the most important things to avoid are: going too fast, not staying in control, and not being aware of your surroundings. Additionally, avoid riding while under the influence of drugs or alcohol, as this can impair your ability to operate the bike safely.

How do you ride a dirt bike for the first time?

If you‘re new to dirt biking, the best way to start is by finding a large, open area where you can practice without worrying about obstacles or traffic. Once you‘ve found a good spot, start by sitting on the bike and getting a feel for the controls. Then, start the engine and slowly give it gas while simultaneously releasing the clutch. As you gain speed, begin to lean forward and shift your weight onto the front tire. This will help you keep control of the bike as you ride.

What is faster a two stroke or four-stroke dirt bike

There is no definitive answer to this question as it depends on a number of factors, such as the type of terrain, the rider‘s skill level, and the bike‘s setup. However, in general, a two–stroke dirt bike is going to be faster in the desert than a four–stroke. This is because two–strokes have a higher power–to–weight ratio, meaning they pack more power into a smaller package. This allows them to accelerate quicker and maintain higher speeds on open terrain. Additionally, two–strokes typically have better suspension than four–strokes, which helps them absorb the bumps and ruts of desert riding.

Ready to Book Your Adventure Tour with BuggyRents